“a state of complete physical, mental and social well-being and not merely the absence of disease or infirmity.”

SAFETY – May be considered to be the state of being safe, i.e. free from the unacceptable risk of injury, danger, or loss.  The key word being ‘unacceptable’.  You don’t need to eliminate risks.  That is not possible.  You simply need to remove unacceptable risks.

Why Manage Health and Safety? – MORAL 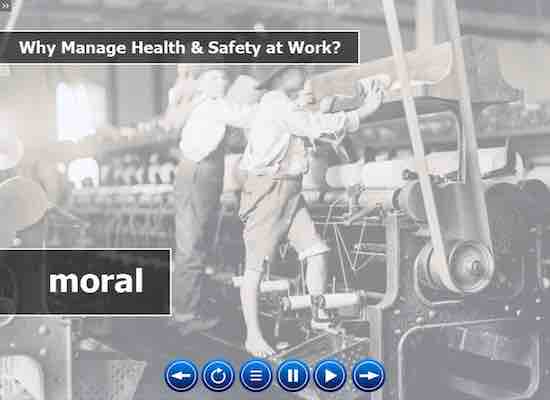 Moral – refers to what is right and wrong

Morals are the codes of conduct, or rules of behaviour imposed by a society regarding what is right and wrong.

For people to be killed, or seriously injured, or to suffer illness as a consequence of work is clearly wrong.

Although, in the UK there are generally good standards of workplace health and safety a lot of harm is still caused each year.

The Health and Safety Executive (HSE) publishes annual statistics of reported cases of workplace injury and illness. As can be seen the numbers of cases of occupational illness is significantly higher than the numbers of injuries.

Typical numbers of reported accidents are below

Typical numbers of cases of ill health each year are below

Below are numbers of workplace deaths attributable to occupational cancers. The total is more than 30x that for fatal injuries.

Why Manage Health and Safety? – LEGAL 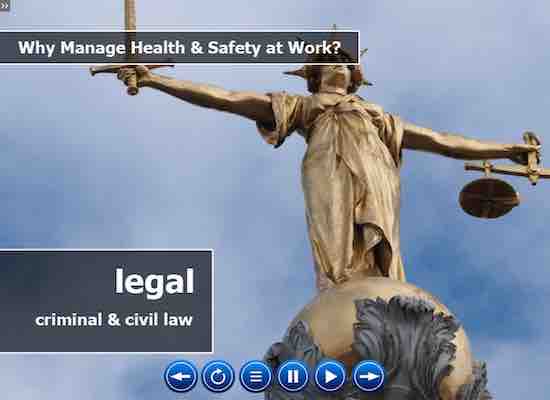 There are two systems of law that influence the management of health and safety.

If the necessary standards are not met the enforcement agencies (the HSE, the Office of Rail and Road – ORR, or the local authority environmental health department – EHO’s, depending on the nature of the work) may take action to secure improvements and / or punish offenders for breaking the rules.

The civil law allows an injured person to sue a third party for compensation for their injury or loss if the injury was caused through the third party’s negligence.

Here we have a comprehensive article on the laws around health and safety.

Why Manage Health and Safety? – FINANCIAL 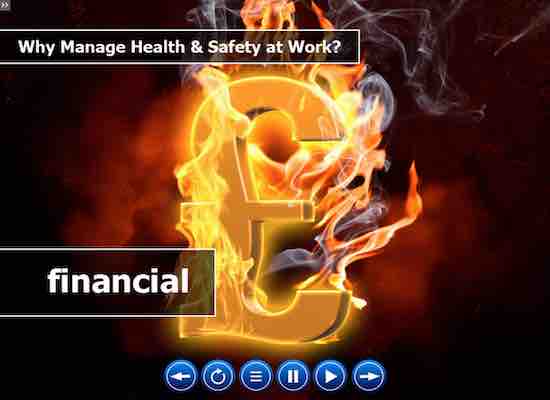 Beyond moral and legal reasons (if thats not enough!), financial motivations, are a big motivator for many organisations.  Accidents clearly cost money as a consequence of injured people, damaged plant and machinery and wasted product.

Health and safety costs can be classified broadly into two overall categories:

Lets have a look at some specific examples of financial costs from not managing health and safety properly.

HSE research showed that occupational injuries and illnesses cost the UK £14.3 billion pounds in 2013/14 considering the total costs to individuals, employers and society.  The costs arise from 23.3 million days lost due to work-related ill health and 4.1 million due to workplace injury.

The costs of highly visible accidents involving large scale loss of life or major property damage as a result of fire and explosion are often determined by official inquiries.

Over thirty years ago the Confederation of British Industry (CBI) gave evidence to the Robens Committee on Health and Safety at Work, stating:

“At the company level, if a readily applied and simple formula could be devised by which the financial loss caused by accidents and diseases could be measured, it would make a valuable contribution towards reducing industrial accidents and occupational ill health”.

In 1989 the HSE began a series of five case studies with organisations from different industrial sectors with the aim of developing a means accurately identifying the full cost of accidents.

The study findings were published 1993 in a HSE Guidance booklet “The Costs of Accidents at Work (HSG96)”.

The five participating organisations / projects were: a construction project; a creamery; an independent transport company working with the creamery; a North Sea oil platform; and an NHS hospital. All had a history of average, or better than average health and safety performance.

The study used a definition of ‘accident’ covering a broad range of losses including: injury and ill health; damage to property, plant, materials and the environment; and the loss of business opportunity.

All personal injury accidents were included as were all other losses above a minimum reportable level which was set at the minimum unit of product or its financial equivalent.

The study accounted separately for financial and opportunity costs.

Financial costs are the basic costs incurred to return the situation to what it was before an accident happened.  This covers both material and labour costs.

Opportunity costs (or lost opportunity costs) include those incurred through: people stood idle or being unproductive as a result of dealing with the consequences of an accident; and energy costs from plant running idle and buildings being lit and heated.

Making the costs of accidents explicit and drawing the information to managers’ attention may not be sufficient on its own to motivate managers to consider health and safety factors as part of their business decision making processes.

Unless the answers to the following variables are positive the calculation of health and safety costs are unlikely to help:

HSE Guidance on the real costs of accidents at work indicates that the uninsured costs of an accident may be more than 10x the insurance premiums paid. Figure 2 shows examples of accident costs that would not be covered by employers’ liability insurance.

The Employers’ Liability (Compulsory Insurance) Act 1969 requires most employers to have at least £5 million pounds of insurance cover (most policies offer at least £10 million of cover) available for compensation payments to employees injured or made ill as a result of work.

The exceptions to the Regulations include businesses with no employees, family businesses and public organisations such as a local authority or NHS Trust.

The number of civil claims for compensation against employers as a result of accidents fell steadily in the early twenty first century and the total cost of compensation cases in Britain has remained, in real terms, static since 1989.

More than 850,000 people are injured or made ill as a result of their job each year. The Association of British Insurers (ABI) put the numbers who gain compensation from their employer at around 60,000 a year.

Average damages for an ELI claim are £7,500. Britain pays out much less on civil compensation (as a percentage of GDP) than other major European countries and about a third of the USA figure.

The average cost of EL insurance is 0.25% of total payroll costs and is the lowest in Europe.

In 1999 the ABI reported that the cost of claims and costs was 54% higher than the amount that the insurance premiums. Since then the costs of ELI have been seen to rise significantly. The major driver for this has been the global economy, not an increase in the number of claims or the size of compensation awards.

Other factors include major increases in legal and medical costs (50% more than inflation) largely because of failure to follow the civil procedure rules resulting in unnecessary costs.

Costs and Benefits of Health and Safety Management

“If you think safety’s expensive, try an accident” is an often cited maxim which was brought back to the fore by Sir Stelios Haji-Iaonnou in his 2004 interview on BBC Radio 4s “On the Ropes.”

Stelios (and his father) faced manslaughter charges in Italy before eventually being cleared in the Italian Supreme Court.

Stelios also reflected that “it takes years to build a reputation, but it can be destroyed overnight.” 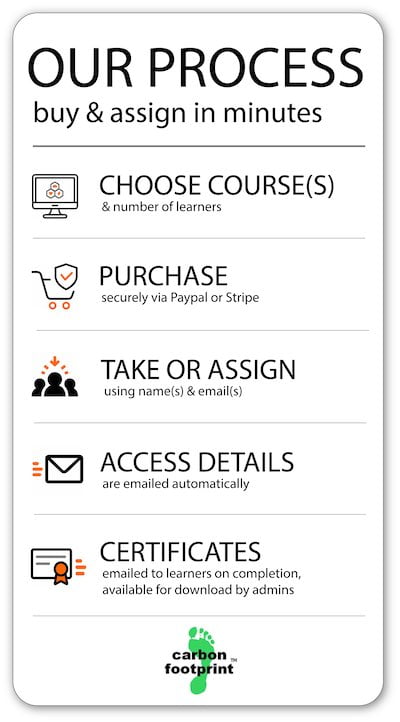