This online environmental awareness course develops understanding of how to reduce the impact on the environment from commercial activities.

Online Environmental Awareness Course  | Global temperatures have risen by 0.6 C due to human activity releasing greenhouse gasses into the atmosphere.  Consequently, our environment is warming.  Unless we act temperatures will continue to rise and businesses must play their part by reducing emissions.

This online course provides staff with the an awareness of environmental issues and understand the steps they can take to reduce the emissions from your commercial activities.

Provide the knowledge needed to reduce the environmental impact of commercial activities.

We begin by outlining what sustainability is and how to achieve it.

Secondly, we highlight the range of issues that are causing problems today and which will grow if we don’t act.  For example; greenhouse effect; deforestation; air pollution; smog; acid rain; waste management and water pollution,

Thirdly, we highlight how good environmental policies don’t just been using clean energy.  Local issues like dust, traffic  or noise can be problems too.  We then provide examples of environment incidents and their cost.

Finally, we detail your businesses responsibility for the environment.  From legal minimums to best practice.

All staff.  Particularly; Office Managers; Facilities Managers; Those with responsibility for environmental policies or procedures.

Completion requires achieving 80% or more in the final short 20 question assessment.  Following this, your PDF certificate will be emailed.  You can retake the assessment if required. 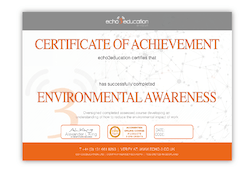 WHAT IS SUSTAINABLE DEVELOPMENT?

Sustainability means meeting current needs without compromising the ability of future generations to meet their own needs.

So, in environmental terms, natural resources must only used at a rate at which they can be replenished.  For instance, Air.  In other words, for sustainability, carbon cannot be added to the atmosphere quicker that it is removed.

Businesses are threatened by climate change some more than others.  For example Insurance costs, Carbon Taxes and energy prices are all increasing some imperceptibly but the trend is consistently up.  To hold global warming at 2C its estimated 15% of global Stockmarket value will need to be spent.  For example a 2018 study found starting now electricity suppliers must retire 1/5 of all non-clean capacity and cancel all new non-clean projects.

But as demand shifts there are opportunities too.  For example the market for clean recyclable products will increase.  To help you capitalise on these opportunities this environmental awareness training course will help your staff understand the issues and therefore help increase the chance of innovation and improve decision making.

Creating businesses that maintain the natural balance of our environment is an ever more pressing need.  As awareness grows, public opinion shifts.  As a result, businesses who cannot demonstrate responsible environmental procedures will suffer.

On the 12th December 2015 195 nations signed the Paris Agreement with the goal of keeping keeping global warming below 2 degrees celsius.  Each nation must make plans to mitigate global warming.  For example the UK and France have already said they will ban the sale of petrol and diesel cars by 2040 as part of the agreement.

By providing a knowledge foundation this online Environmental Awareness course can help SMEs and large business alike move in the right direction.

BUT consider how sensitive the atmosphere is.  Around 170ppm of carbon and earth’s and in an ice age.  300ppm and we are at the highest known in history.  In this period Antarctica had forests and Greenland’s hills were green.  In the last 50 years we’ve shot-up to over 400ppm of atmospheric carbon.  A rate of increase over 100 times faster than at any other point.

So, at the current rate earth’s atmosphere will comprise 540ppm of carbon dioxide by 2040.  That is not far off twice the highest ever recorded prior to human activity. 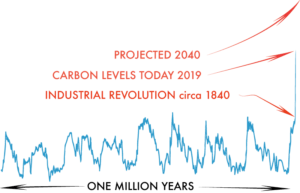 Just like switching on a gas hob to boil a kettle.  It’ll take time before we know the temperature this carbon will raise the atmosphere to.  Anything we can do now to reduce atmospheric carbon will help reduce temperature growth.  Much like turning down the hob.

Human activity has released around 750 billion tonnes of carbon dioxide into earths atmosphere.  As a result global temperatures have risen 0.6 Cs and this temperature rise leads to further temperature rises irrespective of human activity.  This is what the term feedback loop refers to and why it is so hard to model cause and effect.

There are dozens of powerful feedback loops acting all the time.  For example; warmer conditions are causing more Amazon fires. Melt water on top of ice caps is less reflective than snow.  Therefore more heat is absorbed and melting is accelerated.

Potentially the most serious feedback loop involves Artic soil and permafrost.  In the UK our garden soil contains 5% carbon.  Artic soil is contains around 20 to 50% of carbon.    The Artic holds 1,200 billion to 1,500 billion tonnes of carbon.

As the artic warms, like turning up a fridge, permafrost melts and bacteria become more active releasing potentially huge amounts of carbon (and methane).